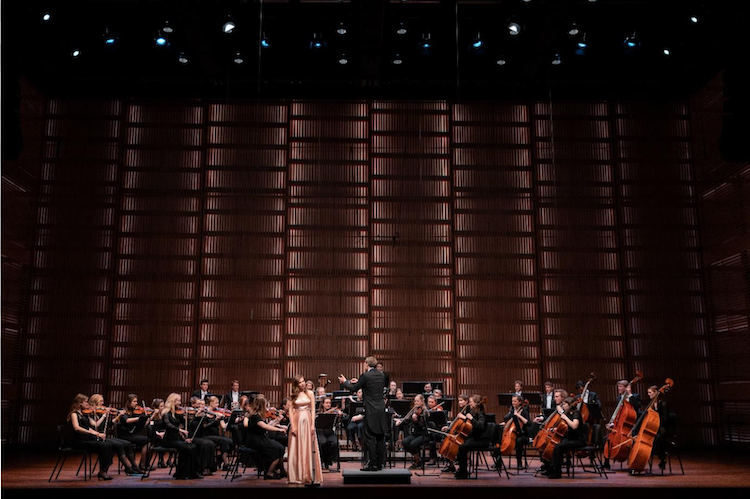 The Dutch Student Chamber Orchestra (Nesko) is a project orchestra and is conducted by a professional conductor. Every year, it is composed of some 40 ambitious students from Dutch universities and colleges who, in addition to their studies, make music at a high level. In just one week, the orchestra rehearses a challenging programme, after which it performs four socially oriented lunch concerts and seven concerts at well-known concert venues throughout the Netherlands.

This year’s theme was Strength, hence the title “Nesko stands strong”. The year 2022 was extra special because for the first time a work by a female composer was on the programme, namely the first symphony by Louise Farrenc.

With this programme, we aimed to underline the influence of women in classical music. This was especially our aim with Louise Farrenc’s first symphony, never before performed by a Dutch student orchestra. In addition, we found it very important that the Nesko also play special compositions, such as the Serenade by Vaughan Williams. After all, this piece only resurfaced in 2012. The individual strength that each person carries was also the focus of this project. The theme of “strength” fits well with the wild Hebrides overture by Mendelssohn. This strength also emerged in Tafreshi’s commissioned composition: it deals with the struggle of women in (Iranian) society. This piece is based on a poem by Farough Farrokhzad, an Iranian freedom fighter. By connecting cultures, we tried to bring diversity and equality into the programme.

– quote from the annual report

On Thursday April 28, a lunch concert was held at the Torentijd Penitentiary in Middelburg, to bring classical music to people who are less likely to come into contact with it. The concert was very well received by both parties. The musicians found it a unique experience and many of the inmates seemed genuinely enthusiastic about the music.

In the evening, a concert was given in the “Burgerzaal” in the city hall. A beautiful hall with a lot of history and fine acoustics. The following programme was performed under the direction of conductor Stijn Berkouwer:

The Familiefonds Hurgronje has made a financial contribution to the realisation of these concerts.